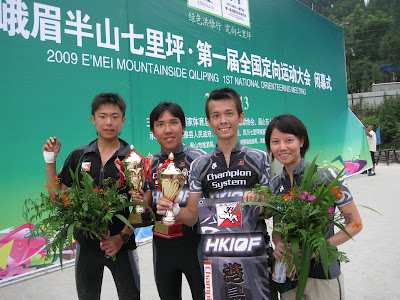 From July 10-14, 2009, HKIOF sent a team to participate in the First Annual All China Orienteering Meet 2009 hosted in Qiliping, Emei Mountainside, Sichuan. After exciting and challenging competitions including Mountain Bike O, Foot O, Night O, and a 100m O, the HKIOF team took a 2nd spot out of 40 teams from China, Taiwan, and Hong Kong (HKIOF is the only team from Hong Kong participating).

This is the First Annual All China Orienteering Meet in its style. Teams of 4 (with at least one female) are required to participate in a total of 10 events in 3 days. 2 of the events are for recreational purposes (War Game O, and GPS O), while the results of the other 8 events are recorded and accumulated to come up with an overall score, which decides the overall rankings. (Rankings were calculated as follows: 1 point for 1st place, 2 points for 2nd place,......50 points for disqualification; the team with the overall lowest point wins)

The team headed out early on July 10th and flew to Chengdu via Shenzhen. The team arrived in the hotel at Hungya, Meishan City at around 4pm. The first night included some administrative work with the organizers, a reception dinner, and a team leader's meeting. On the same day, Chiu stayed in Hong Kong as a helper of an orienteering team building activity in Ngau Liu. Chiu joined the team during the Opening Ceremony on July 11th.

July 11th started with an Opening Ceremony in the largest Square in the city attracting many citizens and reporters. The mayor and many leaders from different areas were also invited. The HKIOF team and the Taiwan team became the point of interest to many of the citizens and participants during the Ceremony and throughout the competition.

Competitions started on the afternoon of July 11th after a 45minute bus ride to Liujiang and lunch at one of the biggest landmarks of the city, Tsangjiayuan. The first event was a Bike O that had a length of 38km, climb of approximately 1000m, and 7 controls. It took place on the state road from Liujiang to Qiliping. Chiu represented the HKIOF team for this event. This event was physically challenging due to the length and climb. Biking has not been a strength of HKIOF due to the limited conditions in Hong Kong. However, Chiu still managed to maintain approximately a 10th position throughout most of the competition. Unfortunately, at the final downslope stretch to the finish, Chiu lost control and crashed when trying to avoid a child who suddenly appeared in the middle of the road. Chiu was wounded, but he still managed to finish the competition in a 16th spot with a time of 2hours and 18 minutes. Chiu had a relatively deep wound on his palm which caused Chiu to give up as the main competitor in the rest of the competition. 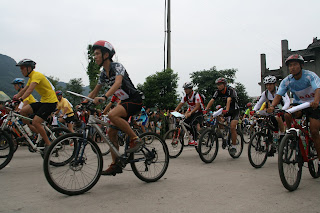 The second event started 30minutes after the start of the first event. This event was a Foot O Event in the old town of Liujiang which required a pair to participate that consists of at least one female. The course details are: 2.2km, 30m climb, and 15 controls. Brian and Iris represented the HKIOF team for this event. The course was technically challenging and required very detailed map reading in figuring out how to go through the alleys in the old town. A mistake was made during the course as the map was misread and the team ran into a dead end. However, the team still managed to end up with a 2nd spot (and a potential 1st spot without the mistake) with a time of 22:20. This event had great atmosphere as almost the whole town came out to watch and cheer for runners who were running all around their backyards. 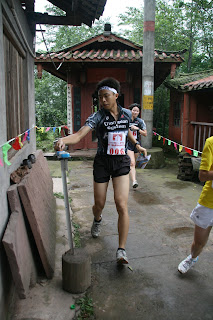 Brian and Iris during the Foot O in Liujiang

After the 1st day of competitions, the HKIOF team was 2nd out of 40 teams, the leading team was the Xian Wolf who won both events on the 1st day. All teams were then shuttled to the Event Center, Qiliping Resort and stayed there for the next 2 days.

On July 12th, the 2nd day of competition, after an early breakfast, 2 events were already on the way. The 3rd event of the competition was a Bike O with half State roads and half rough paths. It had a length of 12km and 10 controls. The start was at the gate of Mt. Emei, Ninggongli. Since our biker Chiu was injured, Brian participated in the competition as a first-timer. Brian was disadvantaged with the relatively slower biking speed, but managed to catch up with the more accurate map reading. Brian ended up 7th with a time of 1:02:42, 11 minutes slower than the winner. 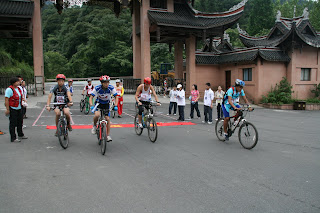 At the same time, the 4th event, a one-person foot o took place. It had a length of 2km with 12 controls. The venue was in a village. Gerald participated in this event. Even though it was Gerald's first ever major competition in China, Gerald still managed to finish with a 3rd place at a time of 23:04. The winner finished with a time of 17:10.

After lunch, the 5th event, War Game O, took place. This was a recreational event that was not included in the overall rankings. The whole team still showed up to support the organizers and see what this new type of orienteering is. Briefly, 2 teams are formed each with a leader; the leaders have to compete in punching controls; everyone, except from the leaders, have infrared guns to "kill" opponents; the first team to "kill" the opponent's leader or punch all controls win. This was an interesting event in which both Iris and Brian participated.

After dinner, the 6th event, Night O, took place. A pair was required but there was no female requirement. The length was 1.3km with 8 controls. Gerald and Brian competed. With efficient cooperation, the team managed to win the competition with a time of 8:16, 34 seconds ahead of the 2nd placed team. 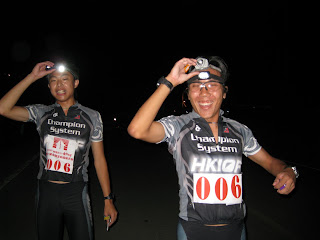 Brian and Gerald after winning the Night O

The team stayed at the event center for some social events and some food for the night. After 2 days of competition, HKIOF was ranked 2nd overall, behind the Xian Wolf Team.

July 13, the final day of competition, started with 2 competitions similar to the previous day. The 7th event was a paired sprint Foot O in a village which required at least one female to participate. The length was 1.8km with 12 controls. Some mistakes were made by the team, but the team still managed to finish at a satisfactory 7th place with a time of 20:32. Xian Wolf won this event with a time of 17:59. 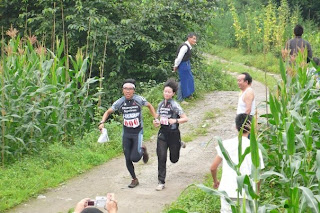 Gerald and Iris Sprinting to the finish

At the same time, the 8th event, Bike O, took place. The length was 6.5km with 6 controls in very rough paths. This was a very physically challenging course and parts of the course (400m) even required the biker to carry the bike. Brian competed in this event and ended up at 12th place with a time of 37:59. The winner finished at 33:56.

After the 7 ranked events, the HKIOF team pretty much secured a 2nd place overall position as long as the team manages to finish the final ranked event without disqualification. The 9th event (final ranked event) after lunch was a typical Chinese 100m O with a 2-person relay element. The team goal was to play safe. Brian and Chiu took part in this event and managed to finish safely at a 11th position and secured an overall 2nd place. 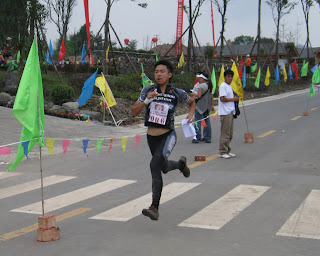 Brian during the 100m O sprinting to pass on to the 2nd leg, Chiu

The 10th and final event was a recreational GPS O in which participants hold on to a GPS device and follow the screen to controls. This was an interesting and fun event for participants to relax a bit after the competitions.

The Closing and Prizing ceremony took place later in the afternoon. The HKIOF Team took away the 1st runner-up position, just behind the winning Xian Wolf Team. The HKIOF Team was also awarded the Entrepreneurial Spirit Award (拼搏獎) for its professionalism and its try-our-best spirit. The night ended up with a farewell dinner in the hotel.

After the competition, the team had the 14th to do some traveling. After discussing with some locals, the team managed to organize a trip in the early morning of the 14th to the Golden Summit of Mt. Emei. The expected sunrise could not be seen due to the fog, but the team managed to see the grand structures and gorgeous nature when the fog faded away every once in a while. Afterwards, the team was driven back to Hungya for lunch in a nice local restaurant (which would have never been discovered if not brought there by locals) The food was good (Not spicy!) and the team was very satisfied. The team was glad to mix in some traveling, socializing, and exploring with the orienteering trip. The team then took a taxi back to Chengdu Airport for the flight back to Shenzhen and home. 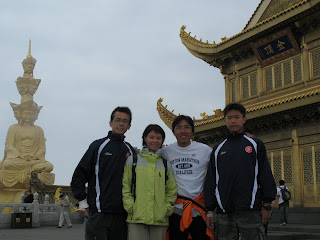 This has been a very worthwhile trip for HKIOF. The name of HKIOF was spread and known in many areas of the country due to the competition. The team cultivated good long-term relations with major mainland organizers, and other teams including the Taiwan team and the Guangdong team. HKIOF looks forward to participating in similar competitions in the future. 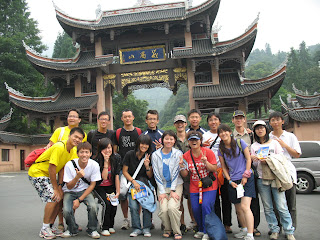 Picture with other teams at Mt.Emei 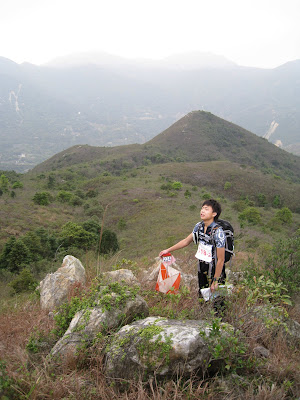 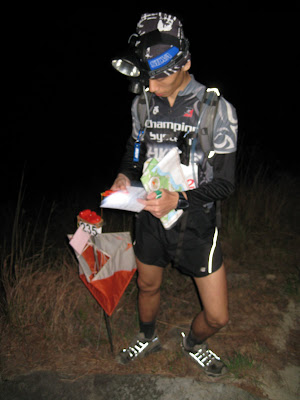 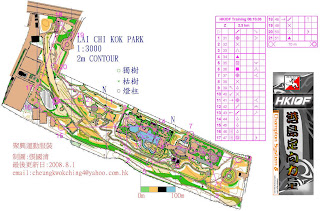 The regular training of HKIOF started from 19/9.
On every Friday nights(7~9pm), we do running and orienteering trainings at Lai Chi Kok Park.

Yesterday we had a 2-men shadowing training- A & B run a course together, while A's map only show odd number controls and B got even numbers.
Posted by hkiof at 10:58 PM No comments: 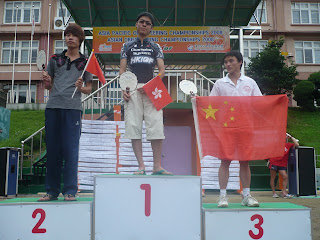 The team of Hong Kong Island Orienteering Force (HKIOF) for the Asia Pacific Orienteering Championships 2008 had a magnificent success in Seoul, Korea this summer. Among the 11 runners we have sent, 9 of them were medalists. The best runner in our team, Lo Tsun Ming, claimed a total of 3 golds plus a silver in all of the four races. 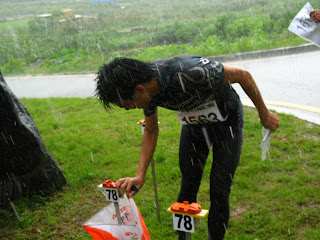 The detailed results are as follows: 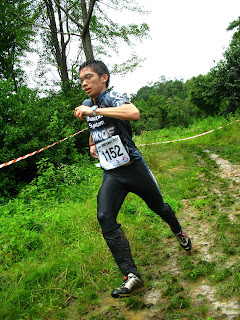 This is the first time we fit on our new club jerseys and tights made by Champion System. We found that the clothes are perfectly matched with this sport. It helps us to perform well under hot and wet weather conditions, and is durable under the roughness of terrain. Also, the advanced laser printing technique perfects our jersey design; which ends up with attracting lots of envious gazes of other orienteers from different countries.

Once again, we would like to express our heartiest gratitude to the generous support provided by Champion System.